​Hey all you basement guitar players! It's time to push your boundaries, get out of your comfort zone and meet some other like minded folks interested in learning more about blues guitar. If you have been stuck in a rut, playing the same old songs and same old licks, then Woodshed Weekend #1 - Electric Guitar is just what the doctor ordered.

Cost:          $350* includes instruction; continental breakfast and lunches
*$15.00 discount for GRBS members at the door
All profits are used to support the ongoing educational efforts of the GRBS .
REGISTER HERE

Who should come out to Woodshed Weekend #1 - Electric Guitar?
Woodshed Weekend #1 - Electric Guitar will include breakout sessions for small groups on specific topics - blues styles, rhythm/timing/feel, licks and tone, phrasing, pacing solos to create tension and release. Each afternoon will include a jam session with a professional rhythm section so that participants can try out some of the new skills they have learned.

After this immersive weekend of guitar instruction, you will come away with a new repertoire and techniques, a reinvigorated sense of direction and purpose, and a greater confidence and joy in creating music.

Woodshed Weekend #1 - Electric Guitar space will be limited, so reserve your spot soon!

Instructors:
Each of these instructors have been specifically selected due to their wealth of performing/teaching experience combined with the ability to connect with students of all capabilities. Together they have created an exciting schedule of sessions for the weekend for participants of all levels.

​Paul began playing guitar in 1987. He studied for several years with Steve Adams of Kitchener Ontario. Paul has played weddings and private events when something "special" is called for.  In 2007 he produced two instrumental CD's, "Guitarzilla" and "Just for Today" which  featured him as a guitar soloist. Most recently he has written a guitar lesson book, "Your Best Guitar Lesson" that focuses on the 12 bar blues form and how to apply many concepts in the blues framework 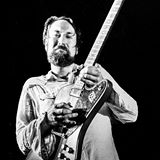 ​With an aggressively soothing voice and guitar chops to back it up, Darryl Romphf is the real deal. A Rock n Roll spirit with dark Blues and soulful twist is on full display with Romphf's passionate and expertly delivered vocal and melodic guitar work. A simmering and brooding Artist, Romphf is equally adept in studio as he is on stage, acting as producer, mixer and guitar player with . Kitchener Waterloo blues rock artists Lumberjunk, John McKinley Band and the Jordan Patterson Band.

​John McKinley, has been involved with the KW music scene since 1979. Hailing from Roswell, New Mexico, John cut his teeth as a  young man playing in blues and horn bands across the Southwestern U.S. ... and it shows. John McKinley has made a great impact  in his adopted homeland of Canada with his critically acclaimed debut album Window On the World. Honoring his dedication to mentoring young musicians and his contribution to the local music scene John was awarded the prestigious Mel Brown Award. Says  Claude Cloutier, Vice President and Artistic Director of the Kitchener Blues Festival: “John McKinley is truly a musical treasure  to the local community...We are fortunate to have such a talented musician in our midst.”